When first wandering around my brand new university campus (Usyd, or Hogwarts as some like to refer to it) my ears were met with the strangest sounds. Flocks of cockatoos frolicked about in the trees, flying from branch to branch and chasing each other around the university grounds.

What struck me most was the inexplicable sound they made.

Their calls sounded like nothing I’d ever heard before outside of 3D dinosaur epics and sci-fi movies. It was eerie, it was loud and it was strange. One blogger likens the sound to that of a pterodactyl—though I’m not sure where she might have encountered one…

Not only do they make hair-raising sounds, cockatoos – as I found out what they were called – behave rather erratically. I stood and watched these bizarre birds in awe. I observed them flying around in illogical patterns, back and forth, turning around midway as though they’d forgotten something—their wallet, their keys—on their previous landing spot. Others hung upside-down from branches like bats; heads leaning backwards revealing their yellow underside, wings flapping frantically.

The enigma of Sydney birdlife seems to pass entirely unnoticed by Australians.

Speaking of bats… There are no words to describe the disbelief felt when I first saw one of the enormous flying reptiles—okay, they’re technically mammals, but they sure look like reptiles. I covered my head with my arms and peaked out through them at the army flying over my house. There were literally hundreds of them, with a sense of purpose that I could feel even from my remote rooftop location.

The bats I now routinely see on a night out in Sydney are what the Titanic was to regular cruise ships, what The Great Wall of China is to the stone wall at the back of your garden, what Arnold Schwarzenegger’s arms are to anyone else’s arms. You get the point, they’re huge.

They fly over my rooftop at 6:30pm precisely every night as the sun goes down. I’m planning on organising a thrilling bat-watching party soon, for all my international friends who live outside of the fly-zone and who have missed out on the tremendous and terrifying sight. After passing over my house they fly on over the university campus. The sight of them prompted one of my friends who was walking on campus at night, still severely jetlagged, to believe she’d entered a sci-fi vampire-bat flick or the set of the newest Twilight film.

Funnily enough, when walking home from Newtown a couple nights back, I saw the bats up close. They looked very rodent-like, with little furry little faces, black noses and beady eyes – looking straight down at us, cosily wrapped up in their wings. From up close they didn’t look threatening at all, less like terrifying night-creatures and more like upside-down hamsters in tiny sleeping bags.

Seagulls, another worldwide common species, are not so different from their European counterparts. The sound they make to beg for food, however, is. When trying to convince some hesitating human, breadcrumbs in lap, to feed them, Australian gulls seem to have a singular technique. They walk hunched like beggars, stick their heads out parallel to the floor and emit a sweet little squeak.

A sound so adorable – or threatening, not quite sure which – it convinces most to part with their sandwich crusts. But once they’ve gotten what they want these gulls turn mean. Sitting in Darling Harbour with a freshly bought Subway sandwich I was soon surrounded by a crowd of expectant seagulls, made bold by the frequent feedings of charitable tourists. The creatures squawked intimidatingly and started slowly closing in. A few impudent birds flew at my face, their wings slapping the side of my head during a set of attacks uncomfortably reminiscent of Hitchcock’s The Birds. My saviour came in the form of a 5-year old Spanish tourist who chased the seagulls tirelessly until they gave up on my now cold Veggie Sub and took off to stalk new, perhaps no less impressionable, prey.

One bird I’d never encountered before was the Australian White Ibis. When I first saw it foraging inside a public bin in Circular Quay I stopped, utterly amazed, and followed the strange bird around. It seemed so completely out of place, much too elegant-looking to be rummaging in rubbish and walking around unnoticed by everyone else. A couple of people looked at me very strangely as I took a picture of what I believed at the time to be a rare sighting of an exotic species in an urban setting.

Turns out these guys are not only everywhere to be seen, they are also much disliked by most Australians. I on the other hand consider their lanky legs and bald heads endearing and have found them to be very skilled crumb catchers, aided perhaps by the convenient curve of their long bills.

The enigma of Sydney birdlife seems to pass entirely unnoticed by Australians.

To a normal streetwalker, the presence of large exotic bird species in the city is as normal as the excessively salty taste of edible yeast (yes, Vegemite).

I once woke up at 5am to the sound of a drunkard in the alley outside imitating a monkey. How irritating I thought, and fell back to sleep. The next day, on a walk in Centennial Park I saw a colourful bird with a head seemingly too large for its body. I recognised it from numerous postcards as the kookaburra. As I tried to approach it stealthily to take a discreet snapshot, it opened its beak and there it was, unmistakable, the same sound as the monkey-mimicking drunkard.

On later runs through Centennial Park I saw a wealth of amazing birds: large pelicans, brown and white geese, oversized and electric-coloured water fowl, a small black and white specimen (since then known to me as the Dalmatian bird) and another I dubbed ‘Waggy-tail’ on account of its strange propensity to turn around, lift its fan-shaped rear-end and shake it—like a polaroid picture.

The best sighting in Centennial Park is undeniably the numerous black swans that live there. When observing them up close I was most impressed by the beautiful undulating feathers on their back, their fluffy-looking necks and bright red beaks. They are also surprisingly friendly, contrarily to the white swans found back home that hiss and snap when approached. When jogging through a large group of them a few days back I exclaimed a jubilant ‘hello’ and a couple of them barked back. The fact that a swan barked at me barely fazed me. I’m in Australia after all.

5 Survivor Contestants We All Wanted To Stay

Cheapest Spots To Rent Close To Every Capital City

5 Adventure Trips Worth Bragging About

Dating Advice From The Opposite Sex 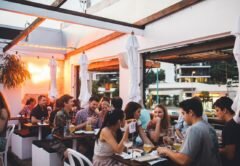