There’s a reason why people tell you to drink responsibly. It’s because alcohol is literally the most harmful drug of them all.

The Australian Drug Harms Ranking Study, published in the Journal of Psychopharmacology – you know this is legit – alcohol has been found to be the most harmful drug to pretty much everyone. That’s because of the insane number of drug-related deaths, injuries, family adversity and economic costs of alcohol abuse.

Alcohol is so dangerous, it beat crystal methamphetamine to the top spot. Yeah, ice. That seriously dangerous drug we’ve been conditioned to fear. Your bevvies are more dangerous than that. 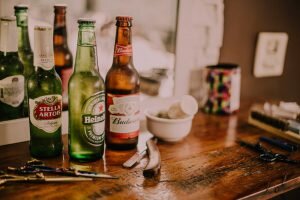 And although that sounds seriously melodramatic, there are some just as serious numbers to back it up.

According to the study, every year there are approximately 157,000 alcohol-related hospitalisations and 5,500 deaths from alcohol-related injuries, illnesses, and accidents. That’s about one person every 90 minutes.

If that’s not reason enough to actually practise the ‘drink responsibly’ mantra, I don’t know what is.

Here’s what else the study found:

Now, that’s not necessarily because of having a few (and I mean a few, like, three) drinks during a Sunday sesh every now and again. But that’s also not necessarily discounting the potential harm that regular moderate to heavy drinking may cause.

And though illicit substance abuse poses serious challenges – especially from second-place crystal meth scoring high on relationship loss, injury, crime, and death, which was followed by heroin in third. But the dangerous and overlooked dangers of alcohol can’t be ignored.

If all of these stats stress you out, they’ve stressed out the researchers too. And they reckon it should stress out our politicians to develop a new national harm-reduction strategy.

Harm is preventable, with the right support and treatment services

“Long term investments in prevention are critical in building a healthier Australia,” said Dr Erin Lalor, the CEO of the Alcohol and Drug Foundation (to SBS)

A lot of the trouble comes from how deeply entrenched alcohol is in our culture. It always has been and probs always will be.

It’s used in almost every social situation, whereas illicit drugs aren’t. You’ve always brought a big blue esky full of tinnies (or Cruisers, whatever you prefer) to the party, not an esky full of hard drugs. Your parents probably did the same thing (the stubbies thing, not the drugs).

Luckily, though, awareness of the dangers of drinking has been growing steadily in the past few decades. And you know how millennials have been blamed for killing the alcohol industry? Yeah, well, we’re all consuming less alcohol than we did 50 years ago, according to the ABS. But that doesn’t mean going on a bender every week (or every other week) is a good idea.

There’s no amount of liver detox treatments that can help heal that.

“There are no health benefits from alcohol. Cutting back can reduce a person’s risk of injuries and accidents, as well as the risk of developing chronic alcohol-related diseases such as cancer,” Dr Lalor said.

That being said, take care of yourself, look after your mates. Remember to pace your drinks with water. Eat properly well before your first sip.

If you’re going to be having a big night, make sure someone is around to be the deso to look after you. Or at the very least make sure that you and everyone around you are across the plans (or not getting as plastered).

Before you go to sleep, drink bulk water and, if you can, find something to eat.

And if you’re properly scared of alcohol, Dry July is just around the corner, so you can give the bevvies a rest for a while.

Have you ever tried a lemon, lime & bitters before? It’s the boozy illusion of your dreams – and it tastes bloody delicious too. 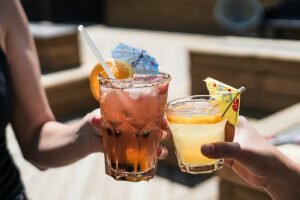 If you or someone you know needs support for substance abuse issues, contact the following services